In 2017, she had the honor of being a guest soloist for the Del Mar Chamber Orchestra. She performed works written by colleagues that range from string quartets and cello solos, to amplified cello with visuals. In addition, Elizabeth performed as a pit musician for operas and musicals including "The 25th Annual Putnam County Spelling Bee"with Texas State University’s Musical Theater Department. Her compositions are featured in the film Yorktown (of which parts of the score can be found on iTunes) and El Cucuy, 2014 SXSW film participant and winner of the Pepe Serna award. As a studio musician, she recorded cello for multiple projects, including Ashleigh Stone’s album, "Elements" (2015) and Memories in Broken Glass’s album,"Enigma Infinate"(2017). 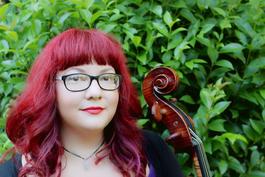